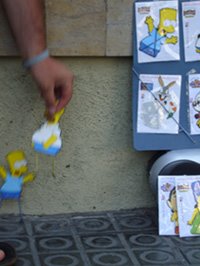 That is, meisters of the gyp.

I got swindled yet again. 15 euros for a cute Homer and Bart duo that don’t dance like they’re supposed to.

I wanted something to brighten up my fusty pension hotel room. I figured one of these little doodads would do the trick. I bought the cartoon cutouts in Plaça Catalunya. They’re supposed to do a little dance routine when you play music.

I turn my radio on. Homer and Bart don’t dance.

Not like they did on the street. Maybe they don’t like the soccer station. I roll the dial to some of that chumba chumba music the kids listen to. Homer and Bart lay there with little spaghetti legs. Not even a pirouette. Nada. Chumba chumba.

I pull on my near empty bottle of Mascaró. Swish the yac around the old bocarino. I put on my coat, then my hat. I cram defective Homer and Bart in my pocket and make for Plaça Catalunya.

Wild-eyed guiris on las Ramblas part before me. Yeh. I’m little hefty and large compared to my Mediterranean brethren. A little overweight even. But when I have The Rage I blow up bigger than la puta vida itself. Even the living statue crooks that line the median turn in awe. I cut my enraged swath through the clueless masses.

Just past the Hard Rock – and crowds of sauced-up chicas – is the perp. The gypmeister with his cartoon characters. There’s a little brat tugging on his dad’s sleeve. Pointing at the cute little bouncing cartoons.

His Homer and Bart, the good ones, do their little dance.

Well, that’s the last time he suckers anyone in this town.

I toss defective Homer and Bart to the ground. They just lay there with their sad little spaghetti legs.

“Hombre. Has vendido un mal Homer!” I point with my thick index finger at the inert toys. “DEFECTIVE!”

I stomp on dancing Homer. So hard the sidewalk rumbles. The brat sputters, then breaks into a pathetic wail. The gypmeister is rock steady.

I scream over the music:

I reach down and grab the boombox. The gypmeister steps in, tries to block me. With uncommon strength I shove him back. Little Homer and Bart dangle from fishing wire. And that’s not all … in the back of the boom box is a motor going round and round. He had it rigged so the motor spun an invinsible cord that made Homer and Bart dance. The audacity!

I spin with olympian force, like a discus thrower. Three, four times then hurl the boom box towards the street.

Baila morena, Baila morena … and crack … it hits the top of a newsstand and bounces off. It shatters on the terrace of Fargi’s ice cream parlor. Guiris scream. The brat boo-hoos. The gypmeister is running like his ass is spitting out fireballs.

This is Kovaks’ town. And don’t you forget it.

5 thoughts on “THE BOUNCING CARTOON CON”